President Trump’s declaration of a National Emergency to divert more than $6 billion to build a wall on the border with Mexico is facing it’s first test in court on Friday, when states and advocacy groups are expected to ask a federal judge to block the funding.

Friday’s hearing will center on the question of the president’s authority to construct a wall using funds that Congress declined to approve for the amount he requested. 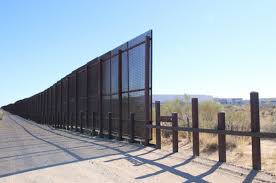 According to Reuters, In February, Congress approved $1.375 billion for construction of “primary pedestrian fencing” along the border in southeast Texas, well short of Trump’s demand for $5.7 billion to build border walls in Arizona and New Mexico as well as Texas.

To obtain the additional money, Trump declared a national emergency and diverted $601 million from a Treasury forfeiture fund, $3.6 billion from military construction and $2.5 billion earmarked for Department of Defense counterdrug programs.

“Congress’s refusal to fund President Trump’s wall isn’t an emergency, it’s democracy,” said a statement from Dror Ladin, an attorney for the American Civil Liberties Union, who represents plaintiffs in the case.

The Trump administration argues the plaintiffs have not shown any injury caused by the funding decisions and that existing law gives it the leeway to redirect the money for such purposes as “an unforeseen military requirement” or a “law enforcement activity.”

The plaintiffs in Friday’s hearing include 20 states, the Sierra Club environmental group and the Southern Border Communities Coalition, which advocates for immigrants. They argued in court papers that the administration has violated the separation of power principle of the U.S. Constitution, among other claims. [Read More]

AT THIS POINT YOU’VE PROBABLY HEARD ALL SORTS OF DIFFERENT THINGS ABOUT THE FREEDOM PHONE.

Use code MAGA to save $50 and fight big tech!
The Blue Checkmark Brigade have come out in full force just like we knew that they would. After all, they can’t stand the idea of not having an iron grip on all your information. They don’t want Conservatives to have anything that prevents the big tech oligarchs from spying, censoring, and banning anything that isn’t “politically correct” or is “out of context” as Facebook loves to say as an excuse for suppression.
Use code MAGA to save $50 and fight big tech!
One of the many perks about the phone is that it’s hassle-free. No having to make a trip to go deal with your provider, you keep the same service you’ve always had. All you have to do is take the SIM card out of your old phone and pop it into SIM card slot in the Freedom Phone.  It’s really is that easy to get your privacy back. And the dual SIM card slots are so that you can add additional storage for things like photos, videos, or anything you want! It’s a free country after all.
Use code MAGA to save $50 and fight big tech!
First, The Daily Beast wrote an article saying that the Freedom Phone is, “just a budget Chinese phone“. This couldn’t be further from the truth. While it is an incredible deal, a mere $449.99 with code “MAGA” (compared to a $700-$1000 iPhone12) it IS NOT manufactured in China. Although the Daily Beast might have a “one-China policy” The Freedom Phone is actually manufactured in Hong Kong. You’ll remember Hong Kong from the HUGE protests where they waved American flags and fought hard against the authoritarian Chinese government who was trying to take control of their country. Patriots recognize Patriots, and that’s why Freedom Phone is PROUD to have their product manufactured in a country that is actually fighting with boots on the ground against one of the biggest enemies of the USA.
Use code MAGA to save $50 and fight big tech!
You Might Like